The 25th women's handball World Cup starts this Thursday, December 2, in Spain. 32 teams are taking part, including the German team with RAMPF’s sponsored players Marlene Kalf (right) and Lena Degenhardt (left) from the Bundesliga club TUSSIES Metzingen. We talked to the world-class athletes about their expectations on the tournament.

Marlene, the upcoming World Cup is already your sixth major international tournament, you have played 96 matches and scored 217 goals for Germany – are you still a little nervous?

Yes, it’s a mixture of nervousness and anticipation. Of course, over time, you learn to deal with the tension better, but it never goes away. I think that’s a good thing, because a World Cup is something very special and being a little nervous is part of it.

Lena, when you started your apprenticeship at RAMPF about a year ago, you had never played for the national team – and now you are at the World Cup! What is your secret of success?

The apprenticeship at RAMPF, of course (laughs)! In addition to your own performance, you always need a little bit of luck in sport. I think I've developed really well over the past months. A couple of players were missing from the World Cup qualifiers against Portugal in the spring, the national coach gave me the chance to present myself, and I took advantage of this opportunity. Since then, I've been part of the national team. However, me being able to go to Spain is partly down to an injury to a teammate, and you don't want that happening to anyone. 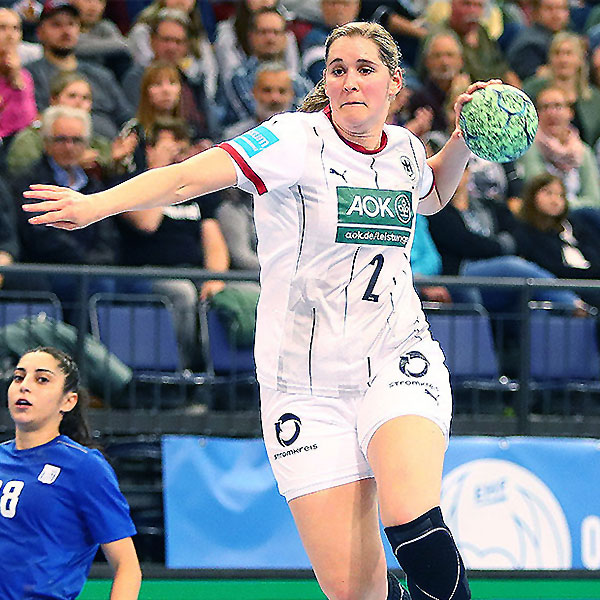 Marlene Kalf has already scored 210 goals for the German national team. We are sure that she will further increase her tally at the handball World Cup in Spain.

Marlene, how quickly can you make the switch from club to national team? What is the biggest difference to your role at TUSSIES?

Lena, is it helpful for you as a World Cup debutant that with Marlene you have such an experienced player as a club colleague ?

She has plenty of experience on the international stage and passes on her knowledge to younger players, both at the club and in the national team. There, I also know some of the players from my time with the youth national team; generally, the team spirit is good and everyone supports each other. It’s great that with Marlene and Silje [Brøns Petersen] there are three players from Metzingen. That helps in some situations, including on the field, because we play together so often.

The German team is playing against the Czech Republic, Hungary, and Slovakia in the group stage. What are the chances of qualifying for the knockout stage?

Marlene: Our group is certainly the most difficult in the preliminary round. It’s a shame that we're facing three European teams, as games against opponents from other continents make World Cups so interesting. Three of the four teams will advance from the group, and that’s clearly our aim. In addition, the points from the preliminary round count for the main round, so every game is crucial for us.

Lena Degenhardt, Marlene Kalf’s teammate at TUSSIES Metzingen, is currently training to become an industrial clerk at the RAMPF holding company in Grafenberg.

What are your personal goals for the world cup?

Lena: I jumped on the World Cup train at the last minute and I'm just really happy to be part of the squad. We’ll see whether and how much I’ll play. If I get the chance, I want to give it my best shot and support the team as best I can. Otherwise, I just want to take as much with me from this special experience and enjoy it.

Marlene: Of course, team success comes first. While I'm on the field, I want to help my team as best I can and use my chances in front of goal as effectively as possible.

THANKS FOR TAKING TIME TO TALK TO US. ALL THE BEST FOR THE WORLD CUP!