It is a technical and architectural masterpiece. Now, the thyssenkrupp test tower in Rottweil also served as an artistic inspiration for the employees of RAMPF Production Systems.

It is the new landmark of Rottweil and probably the most impressive building recently built in southern Germany. The thyssenkrupp test tower is situated strategically on the Berner Feld near the gates of Baden-Württemberg's oldest city, right alongside the B27, one of the most important motorway feeders towards Stuttgart and Lake Constance.

Built to test high-speed elevators, it is has also evolved into a magnet for visitors from near and far. Because, after a very rapid elevator ride, one can enjoy an amazing view from the 232-meter high viewing platform, the highest in Germany.

Always within sight of the tower is RAMPF Production Systems, a leading manufacturer of dispensing systems and automation solutions based in Zimmern ob Rottweil. The thyssenkrupp test tower has accompanied the company’s approx. 230 employees to work every day since it was built – some see it from afar, others drive past it up close.

Every day the tower appears in a new light. Sometimes it sparkles white in the azure sky, shimmers red-gold in the sunset, or shines impressively into the night sky. Sometimes a colorful rainbow spans it; sometimes it mysteriously disappears into the fog.

"You really want to take pictures of it again and again,” reveals marketing employee Bianca Hoch. To reflect the manifold appearance of the tower, she and her colleagues decided to organize a painting competition.

However, simply painting the tower on an empty canvas would not do. Both the artistic talents of RAMPF employees and their relatives as well as the company’s expertise was to be incorporated into the pictures.

This gave way to the idea of “dispensing” the tower – with a robot, mixing head, silicone, and the necessary software. It only took a few clicks until the CNC program had “told” the robot what to do. Within a minute, the tower rose up elegantly in the form of a silicone bead and rich in detail.

The canvases with the dispensed structure of the tower were handed over to the participating employees, who then let their creativity run free at home. Everything was allowed in the picture, there were no limits in terms of painting technique, color, or design.

However, one thing was mandatory – the finished picture had to be handed in anonymously six weeks later. Why? Because a surprise award ceremony was planned for the company Christmas party (as a creative highlight of the evening, so to speak).

CHECK OUT THE VIDEO(TIME LAPSE)

During the six-week “creative phase”, the artists went about their work with great enthusiasm. “Some were so abuzz that they even drew several pictures,” reports Bianca Hoch. “The large number of participants and pictures made this competition more and more exciting.”

More so as the 21 submitted works of art were kept unveiled for four hours at the Christmas party.

The anticipation was palpable as the RAMPF trainees unveiled the pictures. The quality of the works of art was impressive, the variety could not have been greater; sometimes the tower was poured out and surrounded with sophisticated spatula technology, sometimes a chain carousel decorated its flanks or it was part of a romantic landscape.

The attendees of the Christmas party were very impressed by the paintings and delighted by the positive response to the competition. They each had three coffee beans that they awarded to their favorite painting. The winners were quickly determined, but none of the artists went away empty-handed, as they received high-quality RAMPF giveaways like deck chairs, sports bags, or boom boxes.

Every participant also received the popular, bright red RAMPF gecko called “Beppo”, which some will surely place prominently at their work place. It will grin cheekily at them and hopefully remind of the great fun they had during the thyssenkrupp test tower painting competition at RAMPF Production Systems!

RAMPF would like to thank thyssenkrupp-Elevator for their kind permission of this marketing campaign! 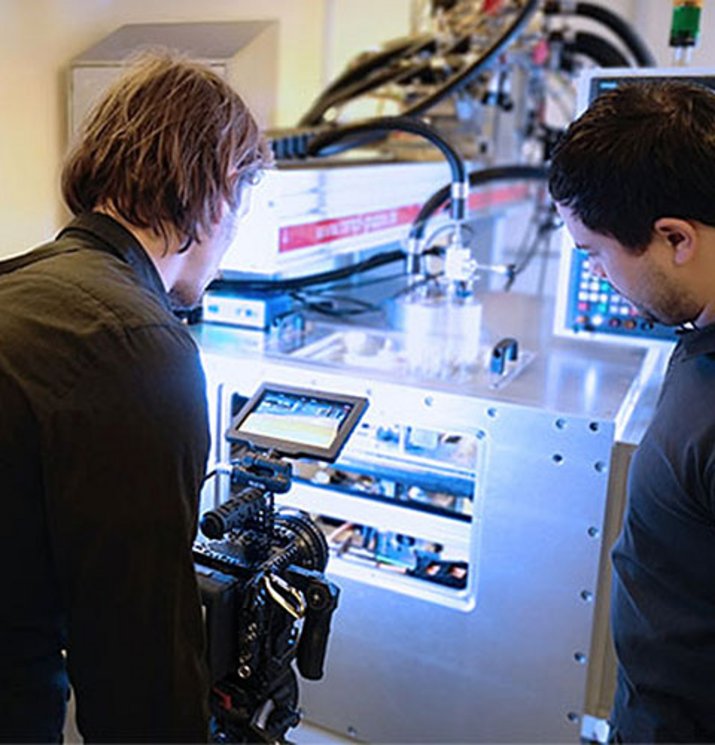