The factory of the future

The “Internet of Things” – the networking of people, machinery, and plants, both with each other and with the world of information technology – is set to be at the heart of the factory of the future. And it is already being developed by Bosch Rexroth, with strong support from RAMPF Machine Systems.

Success doesn’t depend on doing things well, but rather on always doing them better. This is particularly true of industrial production processes. These are already being influenced by the Internet of Things (IoT), and that influence is set to grow
on a radical scale. IoT enables a higher level of automation, greater flexibility and personalization, and shorter repair and maintenance times. In short: a higher level of production system efficiency.

Networking across the board

Through its Factory of the Future project, Bosch Rexroth, one of the world’s leading drive and control technology specialists, is at the forefront in developing this new, more efficient world of production. The project centers on across-the-board networking of sensors, machinery, plants, and processes – in other words, everything that generates information in the industrial environment. The aim is to enable comprehensive transparency and monitoring of the entire production system.

For comprehensive transparency and monitoring all the components need to be integrated into the overall system using information technology, and that starts at the base, the machine bed.

“Integrating sensor and actuator technology into machine beds made of mineral casting means the load-bearing structure can react accordingly to changing thermal operating states and ambient conditions.  Deformations are therefore prevented at the outset rather than being compensated once they have occurred – and that’s what the intelligent factory of the future is all about.”

Together with Bosch Rexroth and project partners Balluff, Sick, and Steinbeis, RAMPF has developed such an “intelligent” machine bed for the Factory of the Future using EPUMENT epoxy resin-bonded mineral  casting. The machine bed is intelligent because, besides guide rails, dummy carriages, and a linear motor, it is also equipped with cooling pipes and sensors that can record and influence the cooling system’s temperature and pressure levels on the fly. This is important because deformations in the machine geometry due to thermal parameters are one of the main factors influencing component accuracy. 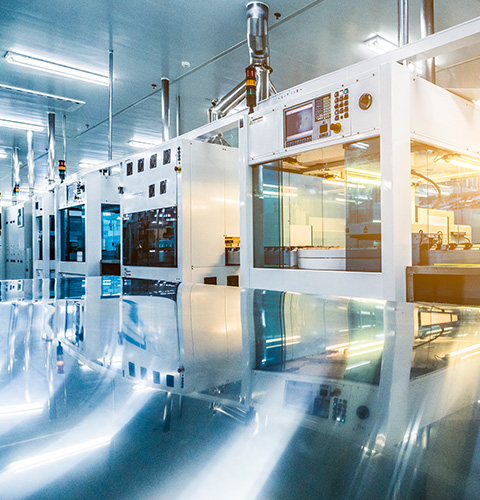 This is how Bosch Rexroth imagines the factory of the future

Four walls, a roof, and a floor – there won’t be much more in the way of fixed components in the factory of the future. Machines and plants will communicate largely wirelessly. Production equipment will adapt to new production jobs autonomously and with a high level of flexibility thanks to the adjustable layout. Significantly reduced setup times will support much greater variations, each with a batch size as little as one in extreme cases. One typical example of the kind of mobility that will be called for would be autonomous transportation systems that move through the production building using cabinet-free drive technology, while simultaneously working on the product and thus generating added value.