The excellent long-term heat resistance of electro casting resins slows down material aging processes such as embrittlement, discoloration, and degradation. This ensures electrical and electronic equipment delivers a high level of performance that lasts. Electro casting resins are key to the further development of numerous industries. The automotive, energy, automation, and household goods industries are all heavily dependent on developments in storing and transferring electricity. Casting systems provide sensitive electrical and electronic components with reliable and efficient protection against chemical substances and environmental influences such as heat, cold, and moisture.

Heat management is another important task, because if components get too hot, their performance suffers or they develop a defect. By surrounding the heat source in components and dissipating the heat generated, electro casting resins ensure the consistently high performance of electrical/electronic systems.

The long-term resistance of the casting resin systems to high temperatures is also vital given that raised temperatures accelerate many material aging processes such as embrittlement, discoloration, and degradation. The relative temperature index (RTI) is the key factor here.

What is the relative temperature index (RTI)?

The relative temperature index (RTI) as defined by UL 746B measures polymers’ resistance to thermal aging. A material’s long-term heat resistance can be ascertained by measuring the changes in its mechanical and electrical properties relative to the predetermined value.

How is the RTI determined?

Samples of a material with a known RTI (control) are aged in direct comparison with a material whose RTI is still unknown (candidate) at a minimum of four different temperatures spanning the expected RTI. If the candidate material’s aging is similar to the control material, it is given the same or, if appropriate, a higher and thus better RTI.

The RTI is evaluated using the Arrhenius equation, which is often used for aging processes. Once all test temperatures have fallen to 50 percent of the initial value (but after a maximum of 10,000 hours), the results are extrapolated to 100,000 hours (control and candidate materials).

In order to better classify these results, however, the extrapolation time should be compared with actual usage. A coffee grinder, for example, is in operation for around 50 hours over a 20-year period. An alternator is used for about 3,000 hours during its service life, but the starter is in use for less than 50 hours over the same period.

The main properties investigated when testing electro casting resin systems are their dielectric and tensile strength.

We have worked hard in recent years to further improve the chemical and mechanical properties of our RTI electro casting resins. We now offer casting systems with a thermal resistance of up to RTI 160°C, which are used in applications such as the automotive, energy, and electrical/electronic industries.

Thanks to the use of non-abrasive fillers, the RoHS-compliant, RTI-listed polyurethane systems can be processed on standard 2-component mixing and dispensing systems. RAKU® PUR systems that are flame-retardant to UL 94 V0 are also available. 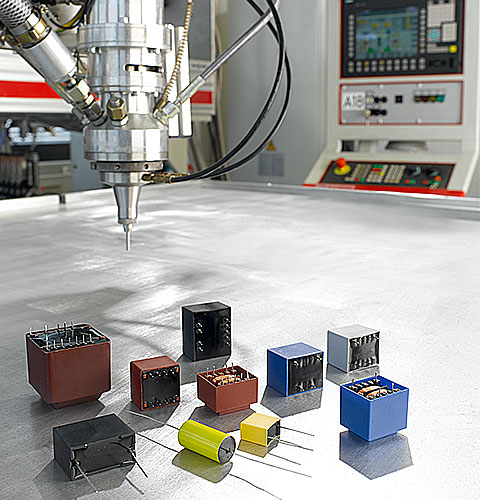 Material quality and material processing are key to the correct functioning and durability of electrical/electronic applications. Whether manually, statically, dynamically, under atmospheric or vacuum conditions, or at high or low temperatures – RAMPF knows how to achieve optimum material processing.